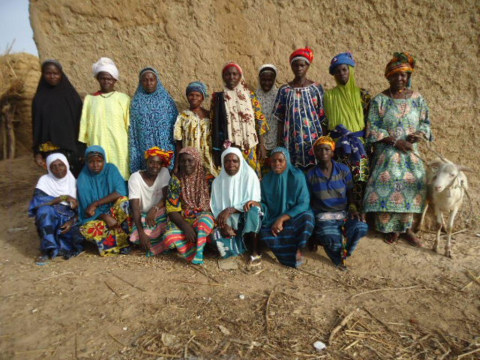 A loan helped to buy sheep to resell with the aim of clothing the children well.

Djeneba Amadou is the woman who is holding on to the ram in the group photo. She is 50 years old, married and mother to five children - including one boy - whose ages range from four to 16 years old. Two of the children go to school.

Djeneba Amadou, who is the president of the group, has never been to school, but she manages to provide for her basic needs and her children's by raising sheep, an activity which she has carried out for the past ten years. Her husband is a market gardner and also raises sheep.

Djeneba Amadou is a new customer of RMCR and is requesting her first loan to buy rams and millet bran, to raise the rams for seven to eight months and then sell them. She goes to the municipality's central market to sell them and hopes to make a profit of 70,000 FCFA. She will use a large part of this income to buy new clothes and shoes for her children, and for herself she hopes to be able to own a herd of sheep in the future.