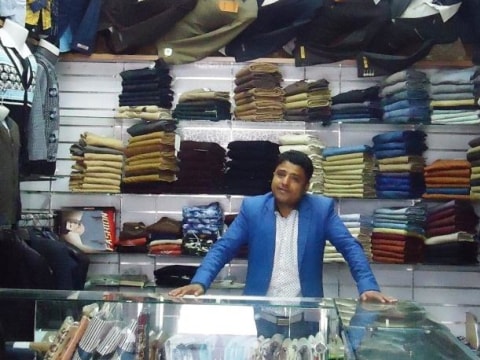 A loan helped to expand the existing solar power system of his clothes store.

Abdulkareem is a 36-year-old married man who lives with his wife and two children in a rented house in Dhamar governorate, Yemen. He is the only breadwinner of his family, as his wife is not working.

Abdulkareem is a hardworking young man with big ambitions. He runs a small store selling ready-made clothes. His store is very famous and attracts many customers. He opened the store four years ago and has made a good profit. However, in the last two years his sales have decreased due to the difficult economic situation of the citizens due to the ongoing conflict. Beside that, he is forced to close his store at an early time at night because of the absence of public electricity.

In the last period, Abdulkareem was able to purchase a mini solar system, but it didn’t last for many hours at night. To solve this problem, he wants to expand his current solar power system and add more solar panels, but he doesn’t have the required money. Therefore, he has applied for a 69,100 YER loan from Al-Amal Microfinance Bank to purchase two solar panels, a solar charge controller, a DC/AC LED TV, a DC/AC satellite receiver, bulbs, and cables.

Abdulkareem is planning to take another loan to open a new branch of his store in another area.