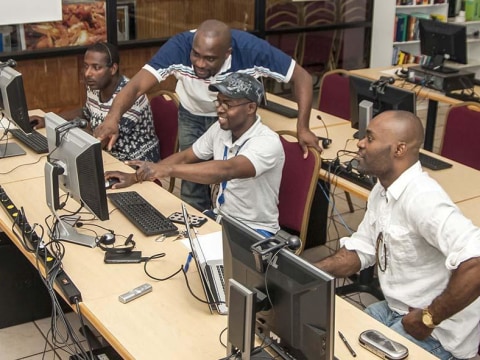 Koami's loan finished fundraising, but these other borrowers need your support

Koami’s Journey to America and Beyond: In 2002, after completing his Master of Arts Degree in Economics from the University of Lome in Togo, French West Africa, Koami’s journey to America began in 2003, when he registered as an entrant in the Diversity VISA Program, and became a selected winner of the USA VISA Lottery. He moved to Minnesota, which has one of the largest resettled refugee populations in the United States. Arriving in Minnesota, not able to speak a word of English, Koami enrolled in the HUBBS Center ELL program. In one year, he reached ELL Level 6 and Writing Level 3, the highest reading, writing, speaking, and listening levels the HUBBS Center offers. Koami enrolled in Saint Paul College where he acquired an A.A.S Degree Microsoft Network Engineering. Transfering to St. Mary’s University he acquired a B.S. Degree in Computer Science. Koami enrolled in the Cisco Networking Academy, at Inver Hills Community College,acquiring the IT Industry Standard CompTIA A+ Certifications followed by the Cisco CCNA and CCNP Certifications, the first two (2) credentials required to open an Authorized Cisco Networking Academy. To acquire the final credential to open an Authorized Cisco Networking Academy – the Cisco Certified Academy Instructor Certification (CCAI) – he enrolled in the Cisco Instructor Training program hosted by the Inver Hills Community College. Koami personally paid for and successfully passed all five (5) Instructor Training Modules comprising the CCAI Instructor Certification. With these requisite credentials in hand, on August 14, 2014, after receiving his IRS 501 (c)(3) Determination Letter, Koami officially opened the only independently run Authorized Cisco Networking Academy in Minnesota. Naming it the “Network Training Institute” or NTI, he has since opened another in his home country, Togo, West Africa (NTI-Togo). He has plans to open more throughout French Speaking West Africa and Europe and in each of the seven (7) metropolitan area counties in Minnesota.