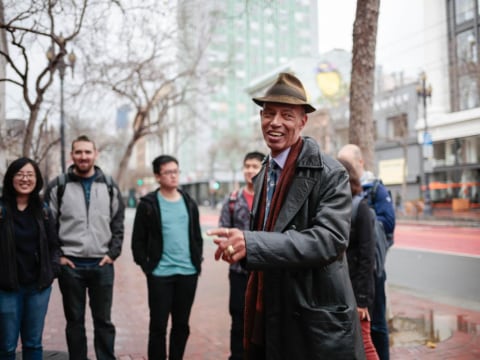 Del's loan finished fundraising, but these other borrowers need your support

A loan helped a formerly homeless veteran and community advocate to help remove barriers contributing to long-term unemployment in his community.

My name is Del. I am a 67 year-old veteran and community advocate. I was born in Chicago, IL, in a housing project in a very poor neighborhood. I was heavily involved in the civil rights movement in the 1960s, and I was a member of SNCC. We frequently traveled to the South to integrate Woolworth's and Howard Johnson's. I personally met Dr. Martin Luther King in several of the marches. While the United States has made progress since then, we still haven't improved enough in employment in communities like the Tenderloin. And it's not just the African-American members of the Tenderloin; many people from marginalized populations have difficulty finding employment. After I spent 18 years in homelessness in the Tenderloin, I decided I wanted to pay it forward to the people who had helped me move forward. I began advocating for the homeless, and I currently serve on four different homeless Board of Directors in San Francisco. In 2013, I saw that there was no program that was dedicated to offering employment to the young population, so I decided to start Code Tenderloin.