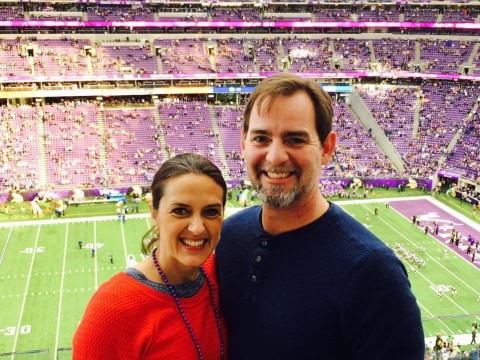 A loan helped to promote health in the community through a disabled veteran and woman owned alternative fitness business in Minot, ND.

My wife, Rachelle, and I haven’t always been avid athletes. In fact, it wasn’t until we entered our thirties that it become something life changing for us. She was from rural North Dakota, and I from the middle of Michigan. We met during my first assignment on Active Duty with the Air Force while stationed at Grand Forks Air Force Base, ND. In 2003, I was assigned to the Antiterrorism Specialty Team out of San Antonio, TX. Rachelle had left her fulltime job to stay at home and take care of our three young children as I did back to back tours in Iraq and Afghanistan for the next three years straight. While I was pushing myself physically at work and in training (additionally entering half and full marathons when I was home), Rachelle had joined a local gym as well. She was introduced to the Danskin Women’s Triathlon series during this time. We found that endurance sports helped us cope with the stress of combat deployments and long separations from each other. Since 2003, I have competed in 13 half marathons, three full marathons, two 10K Euro-style trail runs and three sprint triathlons. Rachelle has competed in 6 sprint triathlons, 8 half marathons, and one full marathon. Each time we fell more in love with the people, and the vibe created at these events. Since retiring in 2014, and being diagnosed with severe PTSD, group sports and martial arts have been my ‘life line’ as an outlet for anxiety, stress and depression. It has provided me with a support group on, and off, the mats to lean on. Rachelle and I have become a stronger couple, more relatable coaches, and simply better people by building a supportive tribe in and outside of a workout.