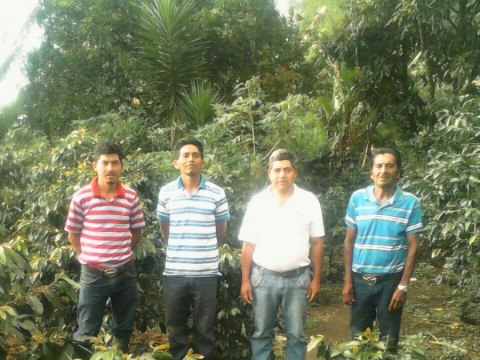 A loan helped to buy fertilizer and to pay for clearing to maintain his coffee crop.

Isauro is 48 years old. He is married and has three children. He lives with his wife and children in the municipality of Intibuca. He has always been in agriculture, and has had his own crops for over ten years.

He has always harvested coffee. Currently his greatest production and sales are from coffee which he sells at the local market.

He is requesting a second group loan to buy fertilizer and pay for clearing in order to maintain his coffee crop. His idea is to expand his coffee farm to obtain better production and with the income, make improvements on his home.

Isauro is a member of the G.S. San Nicolas group, which is made of 4 members. They all live in the same community and work in agriculture.

The group loan is for 34,000 lempiras which they will use to buy compost, fertilizer, and to pay for clearing in order to grow coffee.

They appear as follows in the photograph: Manuel is on the left, Joselino, Isauro, and Rumualdo on the right.