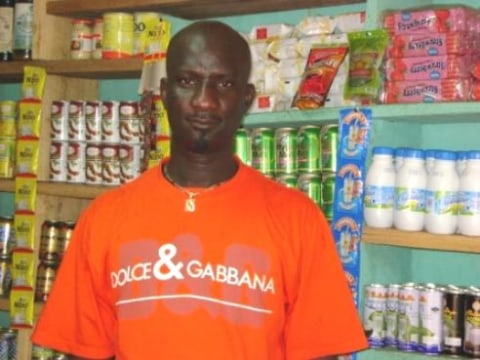 Kansé's loan finished fundraising, but these other borrowers need your support

A loan helped purchase of foodstuffs for resale.

Mr. Kansé C., 31, is married and the father of two children. He lives with his family in Sanoubougou I, one of the working class neighborhoods of the town of Sikasso (third administrative region of the Republic of Mali).

After having tried out several businesses without success, Mr. C. began selling various items. Presently Kansé has chosen a specialization in clothing and foodstuffs. He has two shops, one selling ready-to-wear and one groceries in the bus and truck stop of Sikasso. He is much in demand with his clientele because of the quality of his merchandise.

Wishing to satisfy his ever growing clientele, he decided to join the micro-finance institution Soro Yiriwaso about one year ago. He is on his second individual loan after having reimbursed the preceding one early. With this new loan he intends to buy 8 cases of cookies, 4 cases of Calvé mayonnaise, 8 packets of NBB drinks, 3 cases of soap, 4 cases of BRAMALI drinks, 3 cases of tea, 5 sacks of sugar, 5 packs of candy, 5 cartons of NIDO powdered milk, 5 crates of MALTA drinks, etc. He buys his goods from the wholesalers in Bamako and then re-sells them retail to a clientele composed generally of travelers and especially transporters.

He expects to make a monthly profit of 350,000 F CFA which will be used essentially to grow his working capital, contribute to supporting his family, and pay the interest on his loan, investing any remainder back into his businesses.