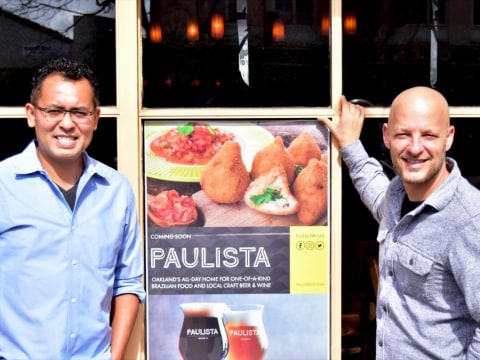 Jesse & Alex's loan finished fundraising, but these other borrowers need your support

A loan helped open Paulista– a simple, casual, welcoming place where friends, neighbors, and colleagues could get together for a bite to eat and a great beer.

I, Jesse Madway, have lived in the Bay Area virtually my entire life, and for most of that time, I have lived in my hometown of Oakland, California. I have spent my entire adult work life - 25 years - in urban public education. The first half of those years were spent as a high school English teacher, and the last half have been as the Dean of Students and as a Senior Administrator at Leadership High School in Richmond, California. All of my years in public schools have been spent in impoverished communities, working with students who desperately need strong educational institutions if they are going to have any hope of reaching their dreams. My partner, Alex Yamamoto, was born in São Paulo, Brazil and lived there until he was nineteen before moving to Japan in 1990. In 1995, he opened "Yes Brazil", a Brazilian style restaurant, in Hiroshima, Japan. Alex left Japan in 2000 to move to the U.S., and has worked in digital marketing for the last several years. For him, Paulista is a chance to bring Brazilian culture - his homeland's culture - to his adopted home; to create a community space that is full of the same type warmth and family spirit that he grew up with in Brazil. As I think about the next phase of my professional life - building a community-focused restaurant in my own Oakland neighborhood - my biggest take aways from my time spent in schools are around the power of belief and fidelity to one's vision for success. When I began at Leadership High School, we were a fledgling school with anemic achievement results which was constantly on the brink of closure. Now, 12 years later, our school is ranked in the top 1% of all public schools in the nation. This incredible rise was due to an unwavering belief in our students' potential, a laser-like attention to detail when building solid systems, and a dedication to achieving excellence that drove everything we did. I will carry these lessons with me as I wade into my new world, knowing that not everything I have learned will be directly applicable to the new challenges I will face, but confident that the same drive and unfailing commitment to excellence will be central to my success.