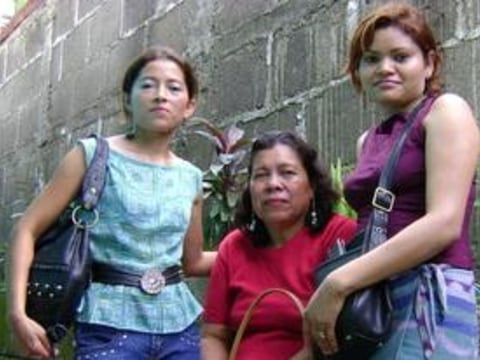 The Sky Group is made up of Benicia Victoria Murillo R., Magali M. R. and Katia R. P.. They are from Piedra Menuda, an area of Nindirí. This is a rural area that is difficult to access because transportation only goes there twice a day. This group of women has already had two loans with Adim, with which they succeeded in increasing their raw materials and their clients. Because of this, they were able to assure that they are hard-working, enterprising, persevering, and have a great desire to overcome. The group leader is Mrs. Benicia Murillo, who is 57 years old and is married to Mr. Antonia M., who is a farmer. They have three children. They live in a small house, which has the necessary amenities. Eighteen years ago, Murillo decided to have a small business in her house because she needed a larger income. As a result, she decided to establish a small grocery store, which would allow her to take care of her daughter, who has Downs Syndrome. Over time, her grocery store has been growing little by little. At present, she has a high demand for her products, which means an increase in the volume of her sales, but to accommodate this, she needs to increase her inventory a lot in basic goods, like corn, beans, rice, wheat, oil, and other things. One of the other two members is Magali Margarita Mana R., who is 25 years old, is married, has completed secondary school, and at present, sells Avon and Zermat brand cosmetics. The other member, Katia Lucia R. P., also sells Avon and Zermat cosmetics. She is married to Fredy M. Murillo, a refrigerator technician. They live in her mother-in-law’s house. All of them need to reinvest in their business, by buying basic products, as in the case of the group leaders, or by buying perfumes and creams, as in the cases of the other two members.