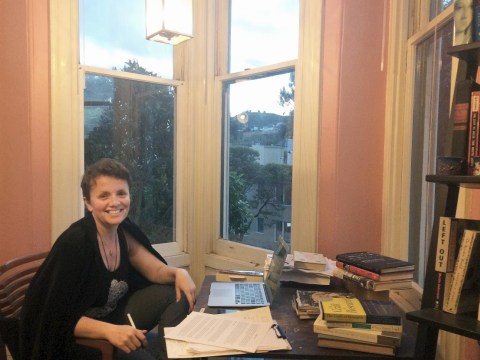 A loan helped fund the essential research, development, and marketing costs of a major 4-part investigative journalism project which explores the eviction crisis in San Francisco.

I grew up in Kyiv, Ukraine, before moving to San Francisco's vibrant LGBTQ community 18 months ago after coming out as a transgender man. I'm a social psychologist, psychoanalytical psychotherapist, writer, developer of an innovative educational system (“The School of the Dialogue of the Cultures"), and activist in LGBTQ, housing, and racial equality rights. In Ukraine, I was co-President of the Center of the Dialogue of Cultures and ran a private psychotherapy practice. I experienced three revolutions in Ukraine. Most recently, in the Euromaidan protests (2013-2014), we protected our pro-European choice and defended against authorities comprised of a mix of criminals and law enforcement. They attacked entrepreneurs, abducted, killed, and raped people. We rose and we won. The night of February 18th, 2014, became the most powerful moment in my life. Several thousand unarmed people resisted riot police, snipers, and tanks. Around 25 were killed – yet nobody left. It was a Revolution of Dignity. Three days later, the criminal President fled, and we created a new democratic government. We succeeded because people of all genders, ages, and socio-cultural backgrounds united to change their destiny. Thus, all my personal and professional experience has cemented my belief that dialogue is a powerful instrument for creating change wherever used – in personal, educational, professional, and social advancement. After moving to SF, I plunged into the spectrum of problems here: housing affordability crisis, homelessness, police brutality against people of color. SF is a city whose diverse communities made her a world legend. Now, they are losing their cultural and historical heritage. People in SF amaze me. They have many ideas for how to resolve these outrageous problems. I created a journalistic model to empower local communities to participate and make better decisions in social and political life.