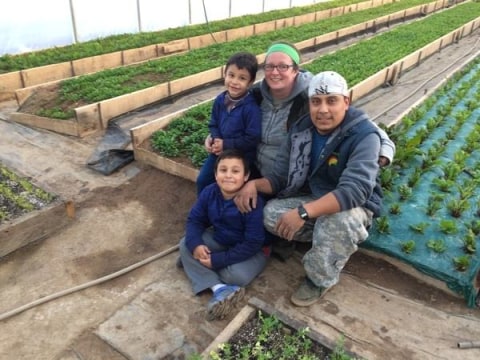 A loan helped us take the next step on our farm. It will allow us to purchase a much-needed second tractor to expand our farming, introduce a new revenue stream, and increase profitability.

My husband Agustin and I fell in love while working on a Certified Organic produce farm. While we were there, through our teens and most of our twenties, we learned a lot--most of all that we both had a passion, not just for farming, but for organic farming. We wanted to take care of the planet, while we helped people access real, clean food. Towards the end of 2008, we purchased our first home together, on the land we now farm organically ourselves. In 2009, while still employed at the organic farm, we decided to start raising pastured poultry. This was the gateway into farming on our own ground, and more importantly, it allowed us to keep our full time jobs, while we made a break for it starting our own farm. Agustin is from Mexico, and I was born here, in the US. The farm was our first child, and as our children would be Chicano, having one Mexican parent and one American parent, we decided on that as a farm name. We added Sol, which means sun in Spanish, since all farms needs the sun, so Chicano Sol farm was born! In 2010, we welcomed our first son, Austin. I continued working at the farm where I was employed, but with fewer hours and responsibilities, until I was no longer needed. I told my husband I wanted a greenhouse where I could raise tomatoes, a cash crop, and it would certainly keep me busy with baby in tow. In our search to find a used greenhouse at a reasonable price, we ended up finding nine greenhouses, complete with end walls, air vents, exhaust fans, a wood stove to heat some and propane to heat the rest, and lastly a walk-in cooler to harvest into safely. It wasn't quite what we had originally thought, but it was a deal too good to pass up. So we bought the whole business, and while Agustin was still employed on the other farm, I compiled a crew, we took the nine greenhouses apart, and in quite a few nerve-wracking trips moved them all, along with the wood stove and walk-in, to our farm. By the time Agustin's season was winding down, we had erected five of the houses on our property and had them covered with plastic, awaiting his expertise on electric and wiring. We were seeding for the first time on New Year's Day! We were young, and now in debt, and hungry! We started attending the Downtown Silver Spring FRESHFARM Market, along with selling to our local cooperative, Tuscarora Organic Growers, and several local restaurants. We have been off and running ever since. While growing Chicano Sol, we also expanded our family, with the arrival of our second son, Evin, in 2012. Our children are living the life, being raised on the farm. I still recall the day Austin, our oldest, came home from school, and said to me, serious as could be, "Do you know, some of the kids in my class don't grow vegetables or even live on a farm!?" That's when I knew without a doubt, this is exactly where I wanted to be in this world, in this life!