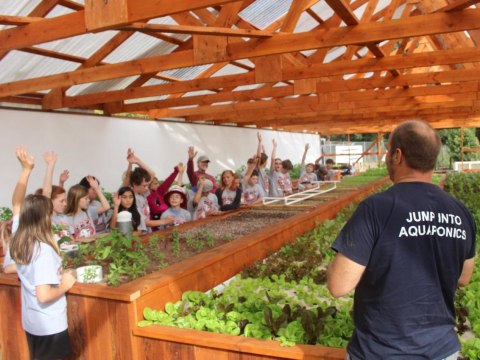 Gary's loan finished fundraising, but these other borrowers need your support

A loan helped install a climate control system in the aquaponic greenhouse we built and operate on the San Lorenzo Valley high school campus near Santa Cruz, CA.

Gary is a microcomputer industry pioneer and entrepreneur. He grew up in Los Angeles during the 60’s where, as a teenager, he serviced aquariums for Hollywood celebrities. In 1977, Gary purchased one of the first 200 Apple II computers. Inspired by and harnessing this new technology, he co-founded one of the first home computer software companies in the United States, Softape. Throughout the 1980’s, Gary held executive positions at computer entertainment companies DataSoft, DataMost and ICOM Simulation. His interest in computers and fish ultimately collided when he developed an (AI) Expert System to monitor and control a commercial aquaculture system. Essentially, he devised a computer program that controlled and automated each element of an overstocked aquarium using rules based on his unique domain knowledge and expertise. This allowed the largest number of fish to survive and thrive. His company’s Decision Support Software (DSS) and hardware was adopted by the Oceanic Institute of Hawaii. Later at UMECORP, he led software development for a Virtual Reality console prototype with visions of revolutionary uses in medicine, manufacturing, education, and entertainment. Twenty-five years later, these applications are being perfected and could even be applied to aquaponics. Gary has held the position of IT Coordinator for a large San Francisco Bay Area non-profit agency since 2001 and serves on the Board of Directors for the Monterey, CA non-profit organization, SchoolGrown, Inc.