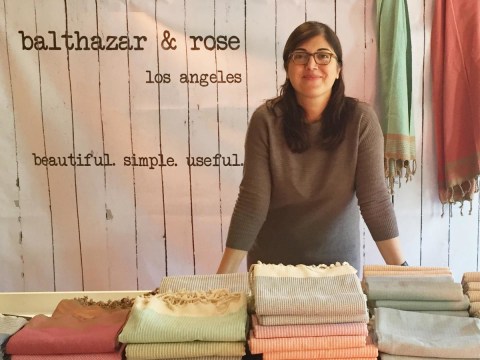 A loan helped this female entrepreneur to grow her social enterprise, supporting artisans in Tunisia, and employing formerly previously incarcerated men and women in the US.

I was born in Iran and immigrated to the USA with my family at the age of 7. Less than two years after our arrival, the Iranian Revolution and the Hostage Crisis occurred. I think that is where my deep desire to bring together my two cultures (Iranian/American, East/West, Muslim/Christian) was realized. I've worked in the NGO world for the better half of my career, focused much on NGOs that promote cultural and educational exchange. We visit Tunisia often with my husband of 12 years, a Franco-Tunisian. Over the years, while visiting Tunisia, I fell in love with their crafts and culture. I also felt deeply inspired and guided to find a deeper purpose linked to this East/West divide. The Arab Spring had begun in Tunisia with one frustrated small business owner setting himself on fire. I had been a fan and small loan giver of Kiva since 2010 after reading Nicholas Kristof's book Half the Sky, in which Kiva was mentioned. What if we also helped in our own small way, supporting artisans and small businesses in Tunisia by importing their products, and helped locally by reaching out to help the marginalized of Los Angeles? In doing so, we could help to bridge this gap between our cultures by showing how connected we all are through the basics of life: beautiful, simple, useful items such as towels and soaps. Step by step, with much discernment and pragmatic preparation came the idea of Balthazar & Rose. We import artisanal Tunisian towels called Foutas, as well as a wonderful product called Aleppo Soap made by a Syrian Aleppo Soap Master. Both are ancient traditions of the East that fit effortlessly into the modern world.