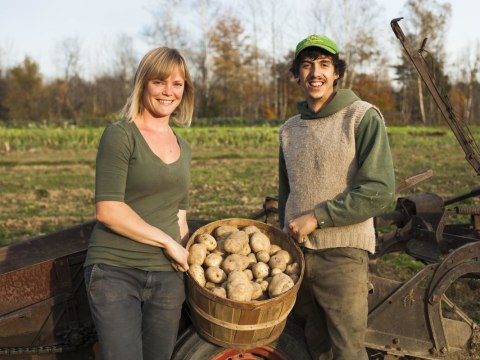 Johanna's loan finished fundraising, but these other borrowers need your support

A loan helped purchase a new delivery van, which will increase capacity and improve efficiency and therefore help to grow profits.

Both Jarret and Johanna grew up farming. Jarret's father raised sheep and used the wool to knit socks. He had a wool sock business for 15 years. Johanna's parents raised food to cut down on the grocery bill for their family of seven. Both Jarret and Johanna grew up knowing what work was. Johanna left Maine for college and was sure she wanted to pursue a life that was very different from how she grew up. However, it took only a year before she realized her true calling was growing food. She studied abroad for a semester in New Zealand at one of the country’s oldest agriculture universities. When she returned to the States, she transferred to Sterling College in Vermont, where she received her Bachelors in Sustainable Agriculture in 2008. From there she spent a few years traveling the country and working on different farm operations. Jarret too, took a hiatus from Maine and farming until in 2007, while in Asheville, NC, he had a dream that he was supposed to be a farmer. He moved back to Maine and started working at an organic farm until he and Johanna met in 2009. They knew each other for less than six months when they decided to farm together and tilled their first plot together. Their first farming season was in 2010 and they have hit the ground running since then.