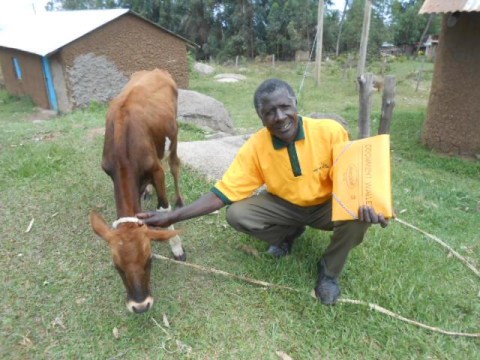 A loan helped To buy cost efficient maize seeds and fertilizer for the coming harvesting season and to purchase three solar lights.

Benard is 56 years old and has 6 children. He has been a farmer for more than 20 years and is always said to be a very experienced farmer. Even though Benard is the only one featured in the above picture, he is actually representing his group formed by 9 farmers in Matete District, Kenya.

Benard started working alongside One Acre Fund a few years ago, in 2010, and decided to do so because he wanted to have access to quality training and acquire new farming methods. Since then, he has seen his life improve, especially in the sense that he has been able to consistently feed his family ever since. This year he decided to represent his group because he wanted to gain leadership skills.Benard will use the profits from this season to invest in a business and buy a cow.