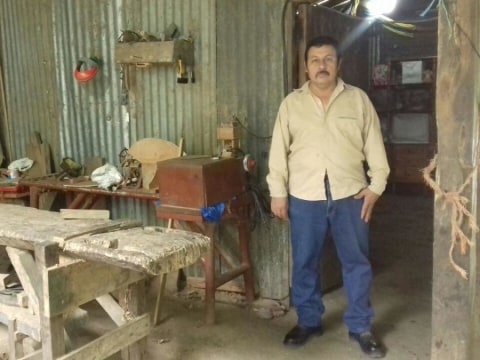 A loan helped to buy a wood lathe and raw materials to make furniture, such as wood, varnish, sandpaper, etc.

José is 51 years old. He attended school until the sixth grade. He is married, and his wife takes care of the home. They have three children who are in school.

José has had a carpentry shop for over 37 years. He learned this work from watching his father who also was a carpenter. In addition, José works in natural resources security for a geothermal company. He has his carpentry shop in his home. His other job is three kilometers from his house.

He seeks a new loan to buy a wood lathe and raw materials to make furniture, such as wood, varnish, sandpaper, etc. He is very responsible as he as already paid off his prior Kiva loan which he also used for carpentry.

José's dreams are to build his own house because the one he has isn't big enough for his family, and to improve his shop so he can do more jobs and obtain greater income.