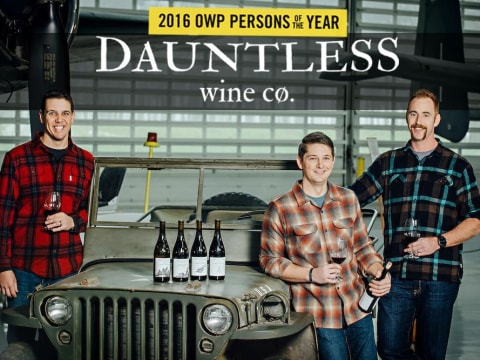 A loan helped us purchase additional equipment to finish our 2016 vintage!

Dauntless Wine Cø. was founded by three Iraq war combat veterans - Ben Martin (left), Paul Warmbier (middle), and Ryan Mills (right); two Marines and one Corpsman. After years of service in non-profit organizations the three founders felt that more could be done for the veteran community - But why wine? Winemakers agree that great wine is made in the vineyard, which at its heart is one of man's oldest agricultural crops. It is well known that Roman Legionaries expanded viticulture throughout Europe to supply the Legion with wine and vinegar. Soldiering and farming have been intertwined for millennia because both require hard work and attention to detail; while tending the land is perhaps one of the oldest methods of post-war therapy. Wine just happens to be the reward for dedicating ourselves to one of Earth's greatest gifts - the grape. However, wine is only half of the equation, and it is not even the most important half. America is faced with a growing need to serve the veteran community, which is often forgotten and left to their own devices. America’s veterans need guidance from within their own ranks. Therefore, Dauntless contributes to organizations that service the local veteran community. Today, two out of every three retiring farmers are not being replaced, and veterans are needed once again to serve America. That is why we are a proud member of the Farmer Veteran Coalition - a 501(c) organization that assists Veterans in becoming farmers and agricultural leaders in the their communities. Dauntless Wine Cø. is committed to veterans through viticulture and enology, allowing them to decompress from the stressors of post-war life.