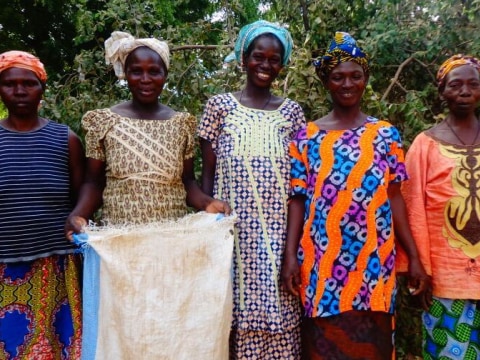 A loan helped stock up on peanuts and millet for resale.

Justine is a 51-year-old Malian. She sells millet and peanuts. She lives in a small village in Mali. She is married and the mother of nine children, including six in school. Her husband makes wooden chairs. She is the one holding the bag. She has been storing peanuts and millet for 11 years. She gets her supplies at the local markets in the region and resells at the same place.

Since Justine began storing peanuts and millet, she has not always been satisfied with the work. She dreams of preparing for her children's future. She goes to the microfinance institution RMCR to ask for financing for her business to be able to work as much as she wants to. After selling the stored millet and peanuts, the revenue she generates allows her to pay for some of her family's expenses, such as health care, clothing and shoes, and her children's education.

The problem Justine most often encounters is a drop in prices in the region.