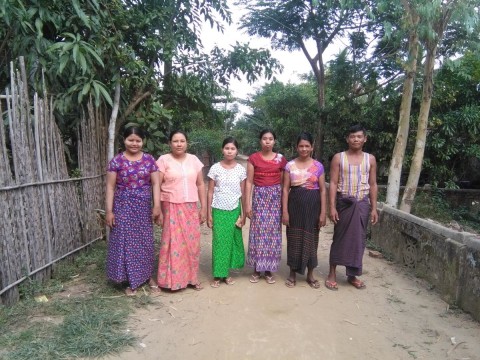 Pay Kone-5 (B) Village Group's loan finished fundraising, but these other borrowers need your support

Included in the picture are Thu, San, Than, Aung, Ei and Khin from Pay Kone-5 (B) Village Group, of Kun Yangone Township. Pay Kone-5 (B) Village Group has six loan group members. As this region is in the delta area, people mostly focus on the business of being fishermen and farmers. In addition, some work as general labourers in the nearby villages.

In the picture, San (first from the left), is 41 years old, and represents the other members of the group. She is married and is living with her beloved family of five members (including three children). Their major income is generated by making fishnets. However, as every day goes by, the household expenditures keep rising.

In order to meet that need, duck raising has become the secondary income of San's family. This loan from Kiva will be applied to purchase more ducklings, duck feed and vitamins, to increase their duck egg production.