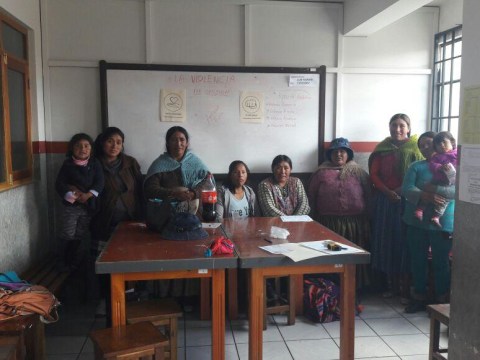 The “10 Estrellas del Norte” communal bank is starting their seventh loan cycle with Pro Mujer, as part of the Alto Lima branch office. It is made up of eight members, led by a board of directors with Lidia as President.

The loan that they are taking out benefits these micro-entrepreneurs, Lidia being one of them. She currently has a business selling vicuña shawls. She said she learned this business on her own a number of years ago.

The loan that she is now taking out will be used to increase her capital, buying wool wholesale, that she will acquire from the wholesale vendors in the city of La Paz. Later she will make the shawls and sell them in her commercial space. This method of work allows her to generate resources to support her family economically as she lives in a common-law relationship and has two children.

Note.- Juana is not in the photo as she had to quickly return to her sales space once the money was disbursed.