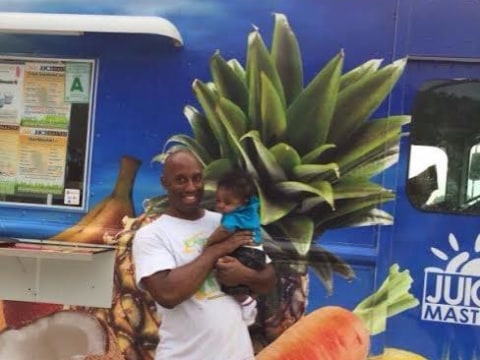 A loan helped to purchase second food truck and launch in Chicago area.

My adolescence and teenage years where troubled. Like many children today, I suffered from what I refer to as an ‘identity crisis.” Void of the presence of positive male role models that I could identify with, I looked to gangster rappers, gangster characters in movies and my peers to model my identity. Instead of identifying with authority figures, my peers and I sought to defy authority to prove our masculinity. This identity crisis was really misdirected masculinity. While some teens aspire to go to college and to become professionals, as an adolescent I closed my eyes and imagined myself a king pin drug dealer. By the time I turned 15, I was well on the road to becoming what I aspired to be. At 18 years of age, I graduated to what Tupac Shakur termed “Thuglife.” This was a counter-cultural movement of organized street crime and a celebration of crime and street life. The best thing that happened to me was getting caught. With the thought of facing prison, I decided that this “Thuglife” identity really wasn’t me. I became open to discovering other identities or black male types. I read every book regarding black people I could get my hands on. I sought out progressive black men as mentors. For the first time in my school career, I became interested in school. My GPA increased to a B+ average which was also a first. This gave me a unique philosophical position. I became dignified and an intellectual student. Delighted with my progress, my mother and I decided it was good for me to leave St. Louis for a more collegiate experience. I went to Lincoln University in Jefferson City. On campus life, I was a leader and student advocate for self-awareness. At this point, as an African-centered and spiritual young man, I condemned drug use, crime and degenerate role models and promoted positive images of African Americans. It wasn’t until years later when I discovered Juicemasters inside of me that I understood my passion and strength. I think I was blessed to avoid prison. Not everyone is as lucky as I was. This is why I am committed to be an example of positive masculinity for youth and warn them of the consequences of underachievement and crime. What I needed as a teen was for someone who I could identify with to provide a positive analysis and interpret street life and redirect my natural male aggression and entrepreneurial aspirations. This is what I have been doing in my adult life through employment, school internship, business ownership and mentoring and my various volunteer activities.