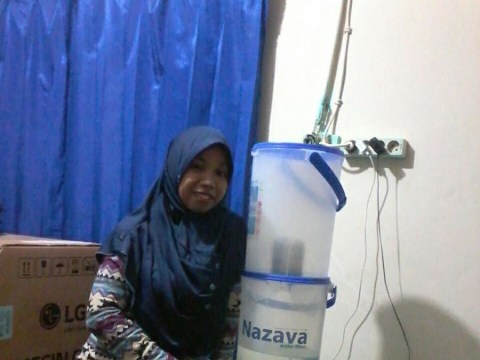 A loan helped to purchase 316 water filters to sell on her island providing safe drinking water.

Mrs Three, is the leader of the Organization of Public Hygiene workers (HAKLI) on Sabu, a small, very remote island in East Indonesia. She started selling Nazava Water Filters because she found that within the community-led sanitation program that she carried out it was difficult to provide households with safe drinking water.

“In Sabu, many people still drink untreated water because they do not have enough money for fuel wood to boil it. Because of this, we started selling Nazava filters so that people do not have to boil their water but can filter it”, Three says.

Three is going to use the current loan to purchase 316 water filters and 50 replacement filters that she will sell to the people on her island. This is the third loan to Mrs Three, she paid the previous loans back on time.

Mrs Three already sold 840 water filters on her island. Selling water filters provides revenue to the association of health workers that has no other income. Even though selling the filters has proven easy, transporting the filters to the villages is very expensive because of bad infrastructure and often a lack of fuel.