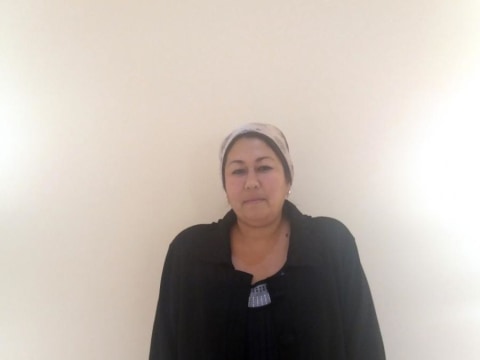 A loan helped to pay tuition.

The woman in this photograph is named Mahbuba. She was born in 1960 in the city of Dushanbe. You can call her a hero-mother, as she has given life to five children. She is a very happy woman. Mahbuba has three daughters and two sons. Her children are 22, 16, 13, 11, and 10. They live as a happy family. Mahbuba studied well in school and upon graduation entered the pedagogical institute. According to her specialization, she should work in a kindergarten, but as she was knowledgeable and graduated with such high grades, she was invited to work in a school. She worked for two years, then went on maternity leave. After a few years, when Mahbuba's children had grown a bit, she was again invited to work in the school. However, the rules of the Ministry of Education indicate that she should not be allowed to work in a school without a higher degree. She provided documents to the Pedagogical Institute and, fortunately, was able to enter a correspondence course of study. Mahbuba now studies on a contract and she needs to immediately pay her tuition. You can support this ambitious woman. She believes in you. She greatly needs this loan.