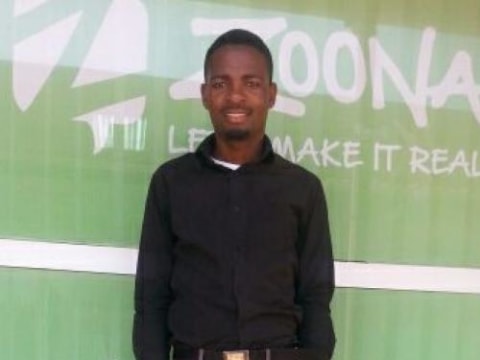 A loan helped to start up his business and procure a kiosk for his trading and a cash float to help his community send and receive money via mobile transactions.

24-year-old Franklyn has endured hardship early in life. Franklyn lost both his parents when he was four years old, leaving him orphaned with his eldest sister looking after him and his younger brother. Franklyn started his studies at business college, but his education has been derailed due to lack of funds for school fees.

Franklyn found work as a teller for a Zoona Mobile agent, with a knack for modern technology and a great business mind. Zoona assisted him with more training and the opportunity to start his own business. He will serve his community with access to cash via mobile transactions, joining the fight against financial exclusion.

Franklyn needs help from Kiva as he lacks the capital for his new venture. This loan would help procure a kiosk for Franklyn to render his service and would provide a cash float to assist with daily transactions.

Franklyn is excited and knows that the minimum he was able to learn at college will be practiced in his business. His future plan would be to complete his studies, but right now he is working hard to keep his brother in school.

Franklyn is thanking all Kiva lenders in advance for this opportunity and their support.