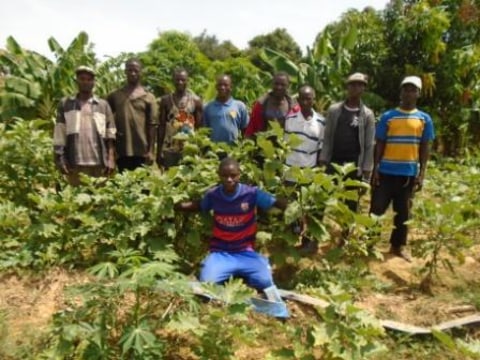 A loan helped to buy seeds and material to grow his garden.

Abdoulaye is sitting in front of the group. Abdoulaye is a young 27 year old Malian. He is married and has no children. He lives in a rural area in his native village. He started market gardening at the age of twelve. Since he got married he has continued it with his wife in spite of both of them being illiterate. He dreams of making his garden into an orange and banana plantation.

With the objective of achieving his goals he is requesting the financial services of RMCR to have the material resources, namely a water pump, wire netting and accessories and pepper, tomato and eggplant seeds to have more space and more profits. As part of this business he is faced with a water problem as there isn't enough water in the off season. Abdoulaye gets his supplies in Kati and sells directly from his garden. He makes an estimated monthly profit of 75,000 XOF that he plans to increase with the loan from RMCR.