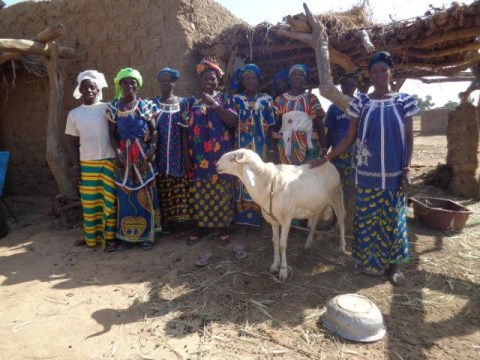 A loan helped to buy sheep for later resale.

The name of the woman who poses her hand on a ram is Mariam. She is 43 years old and married to a farmer. Mariam has six children: four daughters and two sons. Two of her daughters and two of her sons attend primary school. She buys sheep in her village, raises them, and later resells at a local market in a nearby village, with a profit margin of 25,000 CFA francs per sheep.

Mariam is a member of a women's borrowers' group which makes its repayments timely. She would like to take out a new loan with the goal of obtaining several sheep to raise and resell, in order to earn a profit of about 75,000 CFA francs. This will allow her to provide for some family needs such as school fees and supplies for her children as well as healthcare expenses.