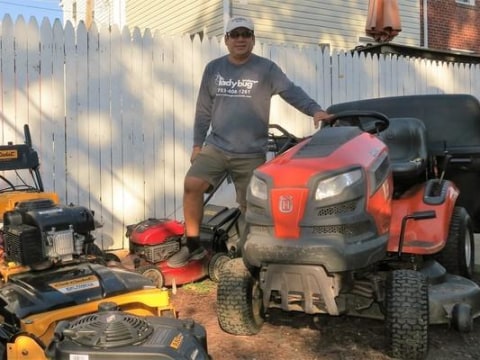 A loan helped me to buy a new truck, so I can grow my landscaping business.

I am from Managua, Nicaragua, where I grew up constantly studying and playing baseball. I also loved to draw and was famous for my caricatures of people. The other children would pay me 25 cents to draw pictures and cartoons for them. My first dream was to become an architect, but the training was too expensive. Instead, I studied biology and soon became interested in plants. I graduated with a post graduate degree in Plant Taxonomy and worked as a professor of forestry at the Universidad National Agraria, and as a National Consultant in the area of Environment for UNESCO until the year 2000. In 2003, I came to the United States and began working night shifts as a cleaning supervisor at a college and later became a manager. It was difficult because I knew nothing about cleaning or the equipment there, and I did not want to be doing that kind of work. So I tested my skills as a landscaper, applying my formal studies to beautifying four acres of land for my wife's boss. The boss loved it and wanted to pay me. Gardening had always been a hobby, but at that moment it became an extra source of income. Expanding my business will allow me to apply the formal studies I obtained in my country, while also helping support my son's college education.