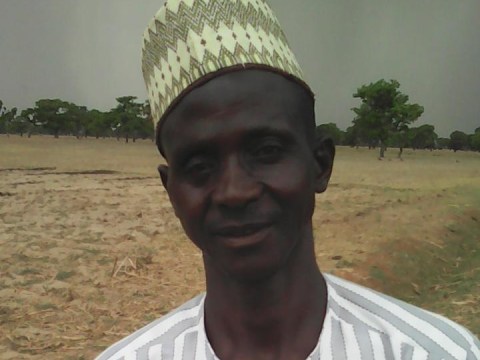 A loan helped to pay for children’s school fees.

M.Mapiaji is a maize farmer from Tashar Jirgi village. M.Mapiaji is happy to be a member of Babban Gona, a partner in the fight against poverty. Building on his previous input loan, M.Mapiaji expects to reap up to 35 bags/hectare of maize, double the national average of 18 bags/hectare in Nigeria.

Babban Gona will provide M.Mapiaji with a harvest advance loan, a cash payment equal to the price of his maize at harvest, to help him meet pressing personal needs. During the harvest, M.Mapiaji will access key services, such as quality threshing and harvesting amenities, which will enable him to thresh his produce on time. This will ensure that pests, which can significantly reduce hisharvest yield and subsequently negatively impact his income, don’t affect his produce.

With Babban Gona’s support, M.Mapiaji will store his maize at harvest and sell it for up to 40% higher than the market price. With his maize stored, M.Mapiaji can generate earnings of up to $1,000/hectare, more than four times the average Nigerian farmer’s annual income.

With this cash advance and added income, M.Mapiaji will be able to pay his children’s school fees, enabling them to access quality education, which prior to his membership in Babban Gona, he would have had difficulty doing.