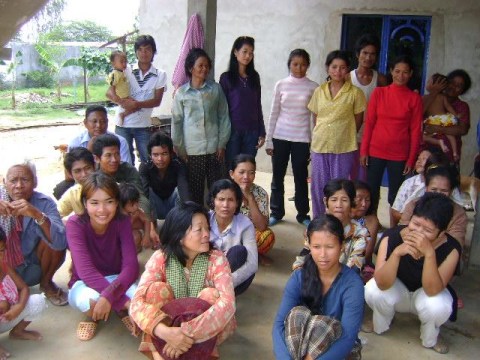 A loan helped To buy fertilizer and to hire laborers to work on the field.

Twenty seven people living in Preah Theat village in Kandal province comprise this village bank loan, and they will use the loan for various purposes. Mr. Chenda T. is the 28-year-old village bank president. Mr. Chenda T. is a farmer who owns 0.5-hectar (1.25-acre) piece of land on which he cultivates rice. In his plantation, he faces a problem because his field is infertile. Thus, he decided to ask for a loan to buy fertilizer; he would use the rest of loan to hire laborers to work on the field. His wife, Mrs. Num Dara, is a construction worker. This couple has two children, one of whom is attending the local school while the youngest one is just two years old. Mr. Liheng P. did not come to take a loan but his wife did, so she is shown in the picture instead. Seventeen members in this group are taking end-of-term loans and the rest have monthly payment loans. Those taking end-of-term loans are not required to pay any principal on the loan until the very end of the loan term. End-of-term (EoT) loans are AMK’s main product because it is the most beneficial to Cambodia’s poor. It allows them to repay portions of the principal whenever they are financially able to. Most clients start to make payments many months before the end of the loan term. Almost all of AMK’s clients make their payments on time. AMK has a delinquency rate of only 0.09% and AMK has a default rate of 0% on Kiva.