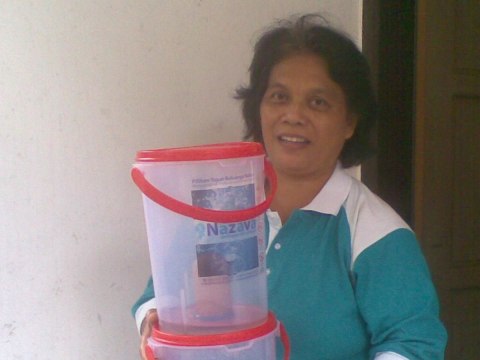 Endang's loan finished fundraising, but these other borrowers need your support

A loan helped to purchase 120 water purifiers to sell to her neighbors providing them with safe drinking water.

Mrs. Endang is the mother of two children and lives in Sumber Manjing Wetan, Malang Regency on Java, Indonesia's largest Island in terms of population.

In Indonesia, you cannot drink city water and most people don't even have access to piped water. Unsurprisingly, most Indonesians boil the water before they drink it. Some people also buy water from refill stations which is not always safe. Mrs. Endang heard of a new option for disinfecting water when the promotion crew from Nazava water filters held a safe water training in her vicinity. Nazava Water Filters filter well, rain, and city water so it becomes safe to drink without boiling, without using fuel or electricity

Mrs. Endang, who fulfills a leading function in her neighborhood, seized the opportunity and became the sales representative of Nazava in her area. This is the fourth time Mrs. Endang has applied for a loan. She has an excellent record in repaying her loans.

This loan will allow Mrs. Endang to buy 120 filters and sell them on consignment to her community, making safe drinking water available to 600 people.