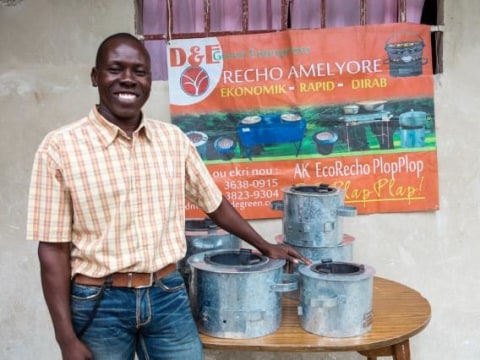 A loan helped to buy a motorcycle and increase his stock to be able to sell more stoves.

Jean-Mary is a proud husband and father of two children. He started as a distributor of fuel efficient cook stoves in September 2015, and since then has made tremendous progress and regularly breaks monthly sales records. In Jean-Mary, you can see the traits of a genuine entrepreneur, and you often witness Jean-Mary in his community with two cook stoves in hand knocking on doors and selling the cook stoves.

Jean-Mary is well-respected within the distributor circle, and like many others relies on the income generated from the cook stoves to support his family (a distributor typically earns $3 on the sale of a cook stove).

Jean-Mary’s home community is now well and truly matured, and it is time for him to penetrate new markets outside of his home community. To do this, he is seeking additional capital to purchase a larger quantity of stock and a motorcycle. Now he asks for a second loan from Kiva because he wants to sell stoves everywhere but bringing two boilers in his hands is really tiring. A motorcycle that has three wheels would be really useful. With this bike he will sell many more stoves and so he will earn a better living and improve his family.