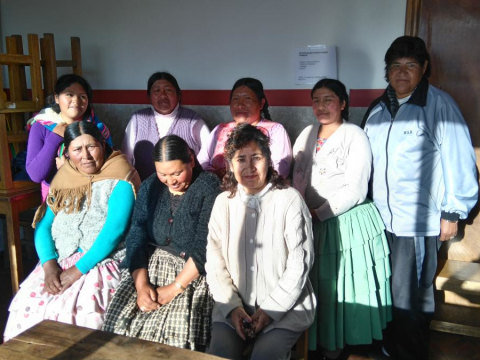 The communal bank "Renacer" ["Reborn"] is beginning its tenth third cycle of Pro Mujer [Pro Woman], as part of the Centro Focal Los Andes [Los Andes Regional Hub]. The group is composed of eight members and is governed by a board of directors. Ritha is the president of the board. This loan would benefit small business-owning women including Ritha. She currently has a business selling mantas (woven shawls). Ritha states that she learned this business on her own initiative several years ago. The loan Ritha is currently seeking for an increase of capital will go toward the purchase of wholesale wool, which she will acquire from the female wholesale vendors of the city of La Paz. Later, it will pay for the commercialization of her retail space. This type of work allows Ritha to generate resources to support her family financially, as she is married and has three daughters.