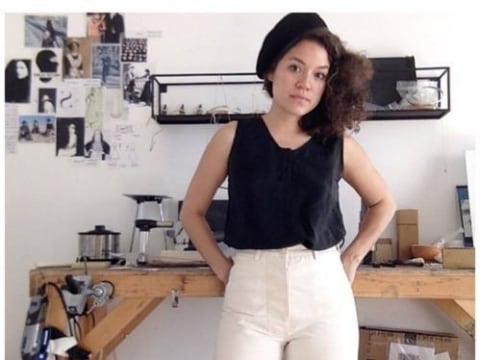 A loan helped me produce my wholesale orders.

I am a self-taught designer who recently moved to New York. I have been making jewelry and taking photographs since I was 5 years old. I grew up in a small beach town in Southern California. My mother is from the Philippines and my father is Irish-American from Georgia. I also had a long term babysitter from El Salvador who taught me Spanish. This hyphenated identity greatly shaped me as a child. I started working in fashion when I was 17 years old. I worked at a surf shop where the owner (a little old lady from Japan) cut and sewed surf trunks. I helped her organize patterns and cut fabric. I also took all the custom orders and took their measurements. From here I kept working in fashion, eventually moving to Los Angeles, where I learned product development and production manufacturing. I love working with people from different countries, and I love working with people who have high skills and use their hands, so this job was perfect for me. Plus because most of the factories in Los Angeles were Spanish-speaking, I got to use the Spanish I had learned from my baby sitter as a child. More importantly than enjoying myself in my work, I felt that I was doing a service to the working class immigrants of our country. Working with my hands myself my entire life, I identify with the laborer and felt that my work with them in a factory setting was very important. Because I have a strong ethic of human rights, I treated everyone I worked with fairly, showed my appreciation for them and made friends with them. This is something I saw that was lacking from other people who worked in my position. They were "the boss," whereas I was the friend. I also felt my work to be important because I was supporting the production of US made goods. Since I was a kid, I've been against "Made in China" products and consumerism, both from a social and an environmental standpoint. Later in Los Angeles, I studied philosophy and (visual) anthropology at the University of Southern California, earning two bachelors degrees in my mid-20s. Because I found work I loved so much, I didn't go to college directly after high school. In the end, I'm happy I made this choice, because I was able to find meaningful work for myself without the pressure of choosing my career path while still in a classroom, without any real work experience. Because of this, I also ended up studying subjects just because they interested me greatly, so I feel I was able to excel in my education since I really enjoyed the subjects. While I was in college I still worked in production, and continue to do so today as a freelance consultant for small businesses who product apparel and accessories in the United States. Since I established my jewelry & accessories line, Bagtazo, at the end of 2013, I have been able to meld all my interests, and do something good for humanity. Because my products are made in USA and created in limited quantities, I feel that I am helping reverse mindless consumerism while also supporting our domestic economy. I feel strongly about working with laborers in the US, because I am aware that without laborers, there could no products. I feel that most laborers are mistreated or treated as less-than, when they are in fact the foundation and the glue that holds our entire society and economy together, so I am happy that I have found a way to show my appreciation for them and support our economy.