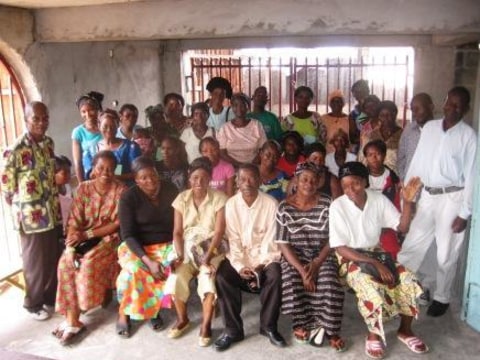 Prodige Plus Group's loan finished fundraising, but these similar borrowers just need a little more help to reach their goals!

A loan helped purchasing flip-flops and salted fish to resell.

Isabelle is a lady who is best known, in her neighborhood situated in the east of Kinshasa, for her love of work and for the good quality of the salted fish and flip-flops she sells. She is also characterized by particular courage and determination. She is always ready to serve her customers. When she gets a new shipment in, she goes around the neighborhood to let folks know.

Isabelle began this business in 1990, selling smoked fish, with an initial capital of US$ 75. After having acquired a solid experience, she worked hard and managed her business well, and the profit she put aside amounted to a capital of more than US$ 400 in 2004.

From 2004-2007 the currency depreciation and price hikes perturbed her business and caused it to decrease. In August 2008, Isabelle decided to join one of the groups of Hope RDC called "Prodigy", intending to increase her capital and find permanent financial support. She is a faithful client who has received several loans from Hope RDC and has reimbursed them on time. The loan she has received this month of June allowed her to buy salted fish and flip-flops to resell so as to increase her revenue. Presently, her personal capital stands at US$ 150. Her dream is to open a general store.

Isabelle is married and the mother of 7 children, whose ages vary between 2 and 20. Five of them are enrolled in school. Isabelle is proud to be a micro-entrepreneur.