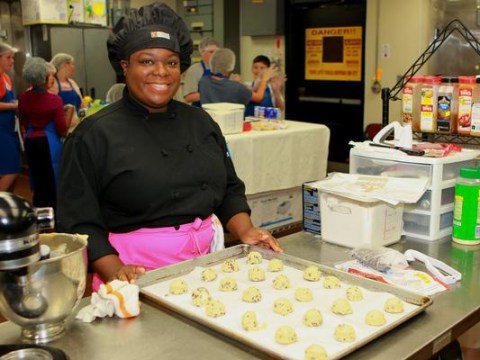 A loan helped us secure a storefront so that we can expand our business.

After almost 10 years in banking and customer service, the daily stress of banking seemed like a very stressful dead end. So she began baking and doing crafts as a way to relieve stress and as a charity to her local church. That was in 2006. Since then she's developed recipes for dozens of cakes and cupcakes. She also has several sugar- free and gluten free recipes. She is a certified Wilton Cake Decorating Instructor. After gaining some confidence in her skills, she completely left the banking industry in 2012 to pursue a pastry arts degree at The Chef's Academy in Morrisville, NC, and everything changed! While she was in school, she met her husband John, and convinced him to go culinary school. She also won Third Place in the 2013 Novelty Cake division in the North Carolina chapter of the American Culinary Federation Competition. Some of her clients include Duke University, rapper/philanthropist MC Lyte, comedian and actress Rain Pryor, Bern Nadette Stanis and Ralph Carter (Thelma and Michael from “Good Times”). Mrs. Riddick has taught private cooking classes, and small groups of students from pre-teens and teens to adults. She also has a certificate in event planning from Wake Technical Community College. In the future she wants to develop a children’s cooking show and distribute some of her delicious cakes nationally.