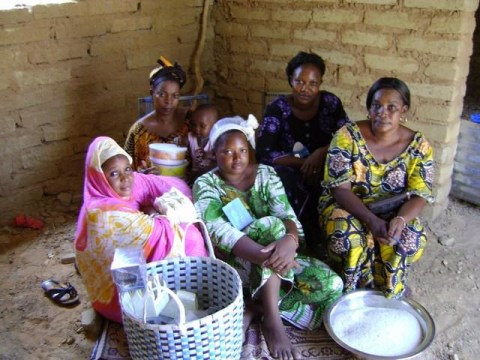 The five members of the Benkadi group are mainly married and living in monogamous families. They have an average age of 31 and two children each. They all live in the Darsalam district of Ségou (Mali’s fourth administrative region) and met each other through neighborhood ties, marriage and by belonging to the same traditional association. The group sells miscellaneous items such as wax cloth, perfume, shoes and cereals (millet, rice and beans). After four solidarity loans, all repaid in full, they are now on their fifth loan which will be used to buy four bags of rice, 21 pieces of wax cloth, 13 dozen perfumes and 30 pairs of shoes. They get their supplies of rice in Molodo and N’Débougou, and wax cloth, perfume and shoes in Burkina Faso. Their clientele is made up of men and women, and they sell their merchandise at retail prices for cash or credit by walking around the various markets and by going door to door in Ségou. They hope to make an average monthly profit of CFA 50,000, which they plan to use for healthcare expenses and the children’s school fees. Their goal is to become wholesalers of cosmetics in Ségou’s main market.