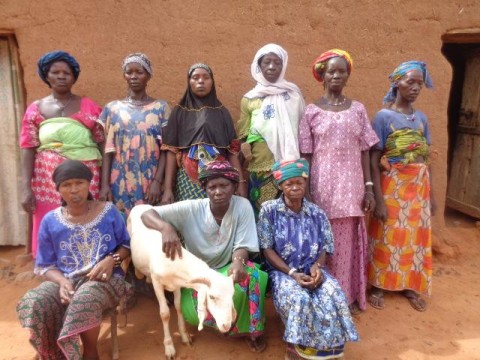 Yamono Group's loan finished fundraising, but these other borrowers need your support

A loan helped to buy some rams to resell later on.

Sitan is the woman who is holding the ram in the group photo. Married to a farmer, she has four children, two sons and two daughters. Two of them are enrolled in school. Her children's ages range from 10 to 16.

Sitan did not have the good fortune to go to school, but she is experienced in livestock-raising and has been selling cookies for 10 years. She has come to RMCR to buy more rams, livestock feed, bran, millet, salt and medicines to treat the animals she raises.

Sitan buys her rams in various fairs in the area, reselling them at the same fairs later on, and often from re-sellers who come to her home. She has lived in the village where she was born for 36 years and has high hopes of a better future that motivate her to raise sheep and sell cookies.

Sitan often has difficulties such as livestock epidemics and especially poor sales. She hopes that in future she will buy a lot more rams and earn more profit so that she can improve living conditions for herself and her family by paying school fees and healthcare expenses.