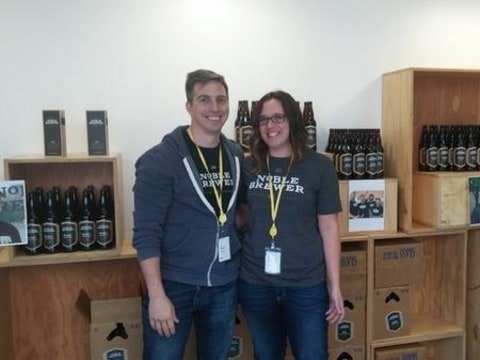 A loan helped purchase inventory to expand our homebrewer club and connect our members to the craft beer world.

Growing up in Maryland, outside of Washington, DC, I played a lot of sports. I wasn't particularly good at any of them so I became accustomed to getting knocked down and picking myself back up. For college, I attended the United States Naval Academy, majoring in physics and then spent six years in the Navy on active duty. I served as the communications officer on an aircraft carrier and deployed in support of OIF/OEF and later served at a professional development command working to select the best candidates to enter SEAL training (BUD/S). Upon leaving active duty, I attended the Massachusetts Institute of Technology's Sloan School of Management to earn my MBA. My time at business school was primarily spent focusing on entrepreneurial studies and I worked in various capacities for 3 different early stage companies. During my second year, the idea for Noble Brewer was born and I began to work to build the idea into a company. My goal from an early age has been to start and build a business from the ground up and Noble Brewer is my first company. The past year has been filled with challenges that have helped me grow as an entrepreneur and have left me more confident in my ability to build it into something great. But of course, we always need a little help along the way.