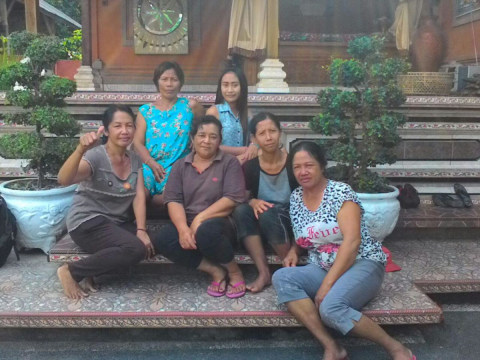 The Mekar Jadi Pondoan group received their new loan. As one of the groups that received the highest loan from MUK, their goal is to make themselves capable in terms of venture capital. This has been evidenced by the cessation of three members because they are now able to manage the business well and continue with their own capital. The other members still need a new loan for their business because they have a strong will to become successful pig breeders. The loan will be used to improve their businesses by purchasing superior piglets or a sow. This group has three new members.

The Mekar Jadi Pondoan Group chose a new head, Ni Made. Ni Made used the loan to buy three superior piglets. She has a plan to keep them for fattening. Her husband helps her by finding a traditional feed such as banana leaves everyday from his garden. With this business, she hopes she can save and renovate her kitchen.

One member is not in the picture because she was attending a religious ceremony at the temple.