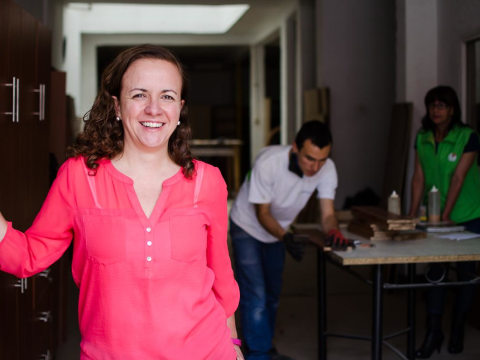 Aflore is a social enterprise in Colombia, founded by Ana (pictured), that provides underbanked people with access to affordable credit and financial skills through an innovative model using a network of informal financial advisers.(For video and more details on Aflore’s business context, please see the “Show Previous loan details” link below) Aflore’s model builds on informal savings clubs that thrive in many Latin American countries, where money is borrowed and lent between family and friends. With Aflore’s model, the financially savvy members of the community (primarily women, who often lead these clubs) become Aflore’s financial advisers. Aflore empowers them with the training, tools and resources they need to help others around them. The result is positive change not only for the borrowers, but also for the financial advisers who act as leaders and role models within their own communities. Aflore financial advisers are like Mery (third picture), who has helped over 20 people in her community (like Vicente, forth picture) with loans to get the capital they need to improve their homes, send their kids to college or stock their businesses. Mery is very well known in her neighborhood because she owns a gym and organizes “Cadenas” (informal savings and lending clubs). About a year ago, thanks to lenders like you, Aflore received a $20,000 loan from Kiva and quickly placed it through its network of financial advisers. The first Kiva loan enabled Aflore to provide over 60 loans, which in turn helped around 300 members of the families impacted by the loans. Nearly half of the first loan has already been paid back. Aflore is asking for your help again. Their network is growing fast (it grew from 250 financial advisers to 850 in one year) and their financial advisers are in need of capital to lend to their communities. With the US$40,000 you lend to Aflore, it will be able to place approximately 100 more loans, having an impact on over 500 people. The loans not only will help borrowers meet their goals but will also strengthen the role of Aflore financial advisers in their communities.