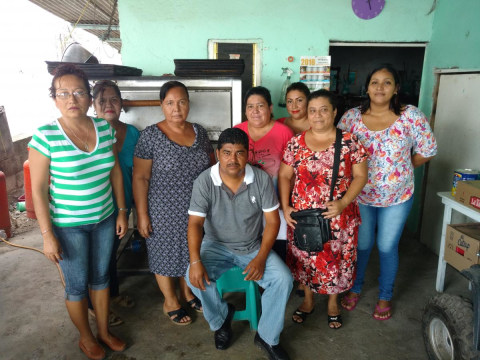 This particular community in Oaxaca is one of the greatest producers of sugarcane, so that during the journey to get to the town centre, the crop fields where labourers toil daily to cultivate the land can be clearly seen. It is worth mentioning that the area is one of the hottest in the whole country.

"Alga y Omega" is the name taken by a group formed in one of the neighbourhoods. The name alludes to the beginning and the end, that is to say, the totality of things. The members are: Juana who will use the loan for grocery products; Lorena, replacement parts for motorcycles; Irma, vol-au-vents and tacos; Veronica and Julia, costume jewellery; Rosalba, clothing; Guadalupe, footwear; Virginia, butcher's shop and Ariel, taxi service.

Irma is a very hardworking woman and much loved by her coworkers in the group. In the neighbourhood everyone knows her as "Mima" and she lives together with her husband Miguel. For more than 10 years she has worked making and selling vol-au-vents and tacos. The sales are carried out by her husband who sells them in the street, so she uses the time to embroider serviettes which generates an extra income. The preparation of each dough involves a different process since she doesn't just make vol-au-vents but also pizzas or bread depending on the season.

There is no doubt that together they make a great team given that while he prepares the ingredients, she sets out the utensils and implements on the work table. Afterwards they put the products in to bake and during this period of time a special warmth can be felt in the house. "What I like most is to smell the products fresh out of the oven, it's something difficult to describe," she mentions with a smile. Likewise, to complement their income they work selling tacos at the weekend, with considerable success since they have customers who regularly come to their business without fail.

*The photograph was taken in Doña Irma's house. She is wearing a red blouse and behind them is the oven.