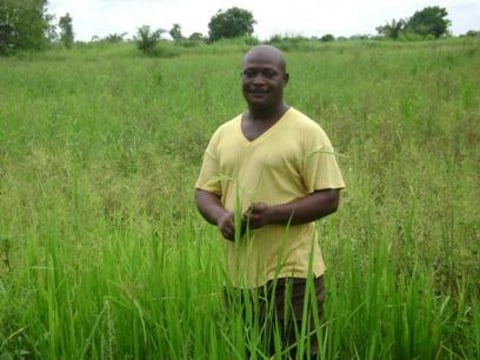 A loan helped Mr. Tonou is asking for a $1,200 loan (plus $800 from Microfund Togo) in order to help him cultivate rice and pay his rent for the land.

Mr. T. is 40 years old, married, and the father of three children. He has been in rice agriculture for 10 years. His wife sells kitchenware. Mr. T. received his middle school diploma and was also trained in rice agriculture. He is currently the technical specialist in rice agriculture that assists the other farmers in his solidarity group with their fields. He began working in agriculture by helping his parents, first by raising pigs, and then with rice. He was able to plant his first plot on rented land with a loan from his father, but this year he did not have the necessary funds to plant, and therefore had to leave his plot empty until the next harvest.

The loan and his income will allow Mr. T. to better care for his children’s education, both are currently in school. He will also eventually be able to improve his family’s home and health. While he is able to properly feed his family, Mr. T. cannot afford the hospital fees or medicine when they become ill. He hopes to one day be able to build a house on a plot of land that he currently owns because since they are now living in his mother’s house.