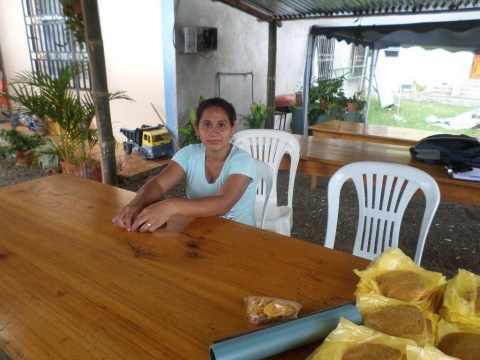 Sonia Jackeline's loan finished fundraising, but these other borrowers need your support

A loan helped to purchase glasses, plates and groceries.

Sonia is 38 years old, is a single mother and has an 8-year-old son, who goes to school. They live in her parents' house in Santa Ana in the province of Manabí, a place which, like the rest of the province, was affected by a strong earthquake on April 16, which destroyed a large part of the province and its economy.

Sonia is a very hard-working woman who has always liked to work and earn a living for herself and her son, since she is both father and mother. She rents a space in a busy location, this allows her to sell a lot. There she sells hamburgers, hot dogs, French fries, empanadas, soft drinks, juices, and other fast foods. She works every night, and has been in this work for a long time, which has allowed her to earn her living and manage that her little one doesn't lack anything. Now, she needs a lot of help since several necessary things in her eatery were damaged and for this she asks for help to continue on with her business.

This loan is to purchase glasses, plates, and groceries to prepare her foods. Her dream is to give her son the best.