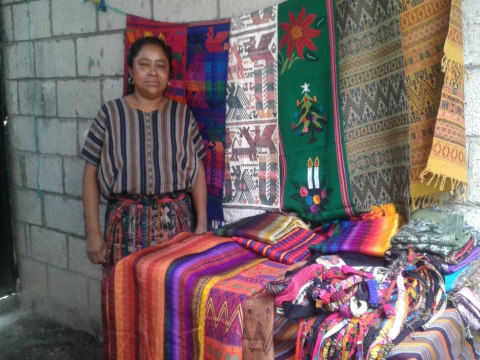 Aura Adilia's loan finished fundraising, but these other borrowers need your support

Namaste is pleased to introduce you to its client Doña Aura Adilia (known to her friends as Adi), an outstanding entrepreneur. Adi is married with five children, three of whom are finished with school and are working. The two youngest are still in school. She is proud of the fact that one of her older sons recently graduated as an accountant. Her husband works in the fields and is also a carpenter. The family lives in San Antonio Aguas Calientes, Sacatepéquez, Guatemala, a town that is known for its beautiful traditional textiles.

Adi left school after second grade to learn how to weave, and has been weaving and selling her beautiful traditional textiles for many years. Her dream is to have her own handicraft shop from which to sell her textiles. Then she will no longer have to sell them on the street, which is what she does now.

Adi is starting her fourth loan cycle with Namaste. When she started working with Namaste, she had a monthly net profit of 1,850 Guatemalan Quetzales. Now, 27 months later, she has completed the three cycles of the Namaste Basic Business Development Program and has had many hours of instruction in how to manage a business. She has also worked for all these months with a Business Advisor who has given her advice on what she can do to grow her business.

With each cycle she received a slightly larger loan, which she invested in her business with the guidance of her business advisor. During her time with Namaste she has learned how to keep track of her sales and expenses; she has started making new products that her competition doesn’t have the skill for; and has even started selling some products in the handicraft market in the city of La Antigua. She also attended the Namaste Business Women’s conference and learned new things about marketing and commercializing her products. She is a hard worker. In order to achieve her dreams she sets a sales goal every day and doesn’t return home until she has reached it.

At the beginning of this fourth cycle her net profit had increased from 1,850 Guatemalan Quetzales to Q 4,500, and she expects by the end of this nine-month cycle to reach a net profit of Q 9,360. During the coming nine months she intends to hire an employee. She also hopes to make some changes in her home to add a small store in the front from which she will sell her beautiful textiles.