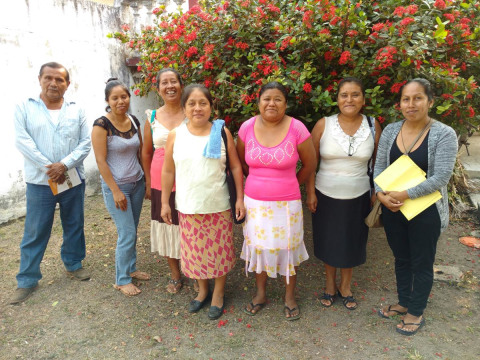 On the way to this Veracruz community you can see different landscapes formed by the sugar cane plantations, the trees on the hills which sway in the wind, and the shade from the trees where many people from the community shelter from the hot noonday sun. The local people speak Mazetecan, the language of their ancestors.

Eight hardworking, responsible, and honest people from the community came together to form the "San José" group, named after their community. They are Guadalupe, Margarita, Irene and Victoria who raise pigs; Rutilo who sells groceries and food; Felipe grows maize; Guillermina sells meat, sausages, and pork crackling; and Susana, groceries.

"As a child I used to help my father sow maize. The money we earned was used to pay for household expenses," notes Sr. Felipe happily. He is an important member of the group. He is married to Sra. Agustina and they have three adult children. Felipe has twenty years' experience growing and selling maize. At the beginning he only had fifty maize plants, but as time passed and he became successful, he decided to work a bigger area and the whole family has benefitted.

Felipe also says, "My family helps me cut the kernels from the corncobs. At first they did it by hand, and now they use a small wooden board on which are fixed eye-screws. The cobs pass through and fall into a pot." The produce is sold locally and in nearby communities. He adds, "The help provided by my family motivates me as does the thought of following in my father's footsteps since he was my super hero."

For Felipe each one of the loans has been a great help because he can buy more seeds and compost and thus offer better quality maize to his customers. At this time he is seeking a loan to buy seeds, compost, and two hoes.

* the photograph was taken in 'La Novia del Sol'. Felipe is wearing a shirt and blue pants.