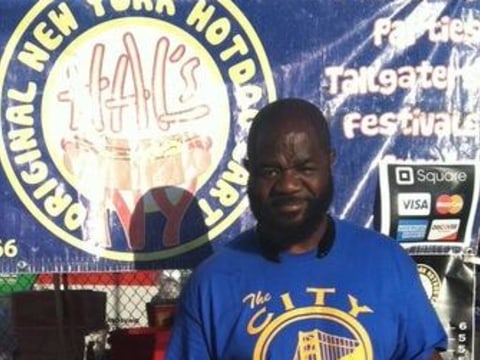 A loan helped expand my catering business and hire some fellow veterans.

Personal Story My name is Harold A. Stevens affectionately known as Hal. I'm the founder and Owner of Hal’s Original N.Y. Hot Dog Cart. l'm originally from New York City however, during my final tenure of Naval service I landed in the California Bay Area and currently reside in Oakland. Growing up in Harlem New York, I often patronized hot dog cart vendors on the various street corners. A few years before retiring from the Navy, I got the notion to look into the benefits available from operating my own hot dog cart. After much research, I found out the following: ➢ 450 hot dogs are eaten every second of every day of every year. ➢ That averages out to about 65% per person in the United States annually. ➢ 15 % are purchased from street vendors. ➢ That’s 67.5 hot dogs per second sold by street vendors. This information convinced me that selling hot dogs could be a very marketable occupation, and thus my odyssey began.