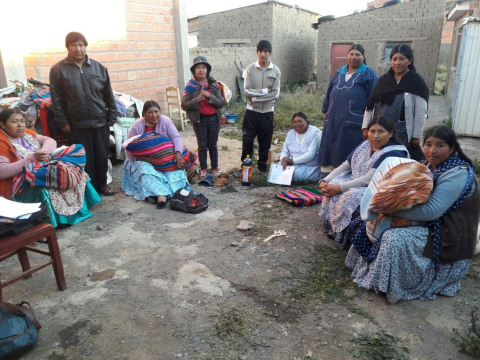 The Nevaditas de Batallas Community Bank will begin its fifth loan cycle with Pro Mujer, a part of the main centre in Copacabana. There are ten members in the group which is led by a board of directors with Sra. Lucia as president. The members of the group have a variety of businesses such as selling chuño (freeze-dried potato); construction services; selling sweaters and sweatshirts; selling detergent; and selling backpacks.

The loan they are seeking will benefit small business owners such as Sra. Lucia. She notes that she has been a member of Pro Mujer for five years and started there after listening to a big promotion that the institution put on in the area. Now she has a business making and selling chuño and growing potatoes. She learned about the business several years ago and started it on her own initiative.

Lucia plans to use her share of the loan money to buy seed potatoes which she will buy from vendors in the community. Then she will plant and harvest them. The income will allow her to support her family financially; she has a partner and seven children.

When Lucia is asked what she most likes about Pro Mujer, she replies that it is the information about health that the institution provides.