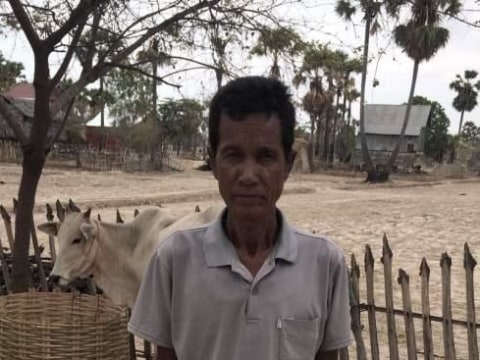 A loan helped to improve his farmland.

Met is 59 year old, a citizen who is living in the Trab Village, Trab Commune, Batheay District, Kampong Chamg Province. He is a farmer who has been involved in that career for about nearly 20 year now. He is a father of two single children. His wife is a farmer also. Both of them can earn a net profit about USD 10 per day.

The rice farmland that Met owns now is small and not smooth. This made his crop not produce well. For this rainy season he wants to increase the output by repairing his dry rice farmland. He will pay a lot in this case. But he didn't have enough money to hire the machinery to repair his farmland yet. So he made a decision to request a loan from Kiva through HKL to add more capital for repair his farmland.

This is Met's second loan cycle with Kiva. He hopes that after this loan he can increase his output and improve his family living. He would like to say thanks to all lenders for their financial support.