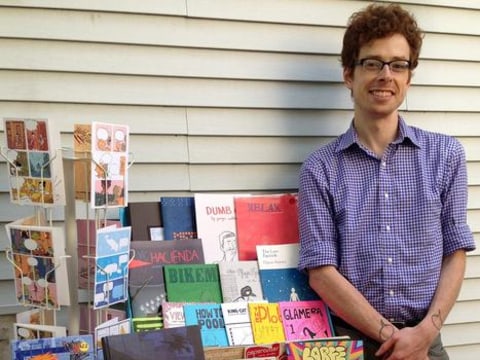 A loan helped publish our first book, which will create a new income source, and expand the company's mission.

Growing up as the middle child of a large and supportive family in Rochester, NY, I learned the importance of working to make the lives of those you care about better. With an overactive imagination and a love for drawing, I became obsessed with comics at an early age, drawing throughout my childhood and becoming the comics editor at my college newspaper. When I moved to Chicago in 2003, I discovered self-published and small press comic books, and knew I had to create my own. Soon I was photocopying my comics, selling them at local bookstores, and sharing them with friends! When I started exhibiting at comics festivals in 2008, I was exposed to a community full of comics makers who shared my enthusiasm. Chicago lacked a small press show of its own, so along with three friends, I founded the Chicago Zine Fest in 2010, bringing together self-publishers from all over the United States and Canada for a weekend of workshops, panel discussions and a book-fair-styled marketplace. After organizing the zine fest for three years, I worked with a group of local comics artists to start the Chicago Alternative Comics Expo (also known as CAKE). CAKE has grown in the past four years to host over 200 exhibitors and 3,100 attendees over three days of programming. We’ve become a 501(c)3, we run workshops in the community, and manage a micro-grant called the “Cupcake Award” for self-publishers. Working to promote alternative and self-published comics, and the creators behind them has become a passion in both my personal and professional life, as I worked for six years at Quimby’s Bookstore, an epicenter for comics and zines! I am constantly looking for new ways to benefit the self-publishing comics community.