Give the gift of lending this holiday season. Buy Kiva Cards here. 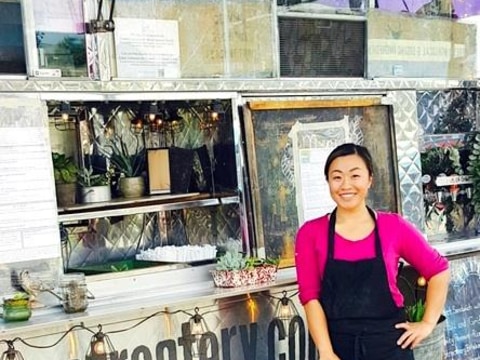 A loan helped tackle opportunities head on and not worry about capital for my business.

My name is Meyta, the youngest of 6 in my family. Our family migrated from a small village in the remote mountains of Laos when I was 3 years old. With only clothing on our backs, you can say that we have come a long way. Where we are today, has not come without challenges often associated with immigrant families. My family’s basic values of perseverance and integrity has carried us through that hardship and many others. Labeled as the hard worker in the family, it didn’t come as a surprise to them that I started working as soon as I became legal. It wasn’t just for the extra spending money or small change to help my parents out, but it was a pursuit to find my passion. I worked whenever I could and would go to great lengths--navigating public transportation from the streets of East Oakland to all corners of the Bay Area, squeezing in work while going to school at Laney College’s culinary program, where I found my passion. One day, I walked into Soizic Bistro in Oakland and built up the nerves to ask for a position as a cook. With no restaurant experience, it meant that I would have to prove myself. And I did. There, I not only thrived as a cook, but my boss, Sanju, trusted me with their entire restaurant allowing me to run it while they took trips out of the country, which they had never done before employing me. This meant a lot to me, it was during these times that I thought about opening my own business someday. Five years ago, DanVy, whom I met while working at Soizic Bistro had reached out to me and was starting a food truck business, Go Streatery. While it may seem like a step down to go from cooking at a full service, formal restaurant to being a cook for a food truck, I jumped at the opportunity to work alongside someone who was starting a business from scratch. Not only was cooking my passion but now, I was seriously giving some thought about owning my own business in the food industry. For the past five years I’ve worked hard at Go Streatery, absorbing everything there is to learn about starting up a small business. DanVy was willing to share the entire process, including all her trials and errors. Intended to be a temporary gig, I was drawn in by the lure of DanVy’s entrepreneur spirit which only sparked my own. At the end of last year, DanVy encountered an opportunity to open a restaurant and needed to sell the her food truck business to be able to commit more time to starting her restaurant. As a cook, I would never be able to save enough money to be able to purchase the truck and business but I knew this would be a great opportunity for me so I came up with a solution to lease the business. DanVy was sold on my idea. In her own words: Without a doubt, I wanted Meyta to run my business. Her work ethics, her commitment to quality, her talent, and her loyalty made it an easy decision. Above all, her entrepreneur spirit and strive to always learn and grow put her above the rest. In August of last year, we decided to give the new structure a trial run. By the end of last year, I had ironed out some kinks. I even made some small changes to cut expenses. Things were running great. Then at the start of February of this year, out of nowhere, the truck's engine needed to be replaced. Not only a new engine replacement would be costly, a month without income and continued fixed expenses ate away at all my operating capital. I have gone so far and will do anything to persevere through this small setback. To bounce back, I will just need a loan to use as operating capital for supplies, food, and payroll.